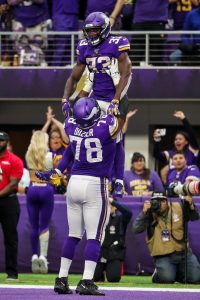 Dakota Dozier will not play for the Bears this season. The former full-season Vikings starter signed with the Bears this year, but the team placed the veteran offensive lineman on IR on Tuesday.

While eight players can return from IR per team this year, that only applies if they are carried through to the 53-man roster on final cutdown day later this summer. Any player who lands on IR before that date cannot play for that team this season. Dozier’s only path to suiting up in 2022 will be via an injury settlement that leads him off Chicago’s IR list, assuming the ninth-year blocker will be healthy enough to play this season.

The Bears gave Dozier a one-year deal worth the veteran minimum in late March and did not include any fully guaranteed money in the pact. Dozier, 31, appeared to be a depth piece in Chicago, but Kevin Fishbain of The Athletic notes (via Twitter) he did see some first-team reps at right guard during the Bears’ offseason program. Cody Whitehair and Sam Mustipher are positioned as Chicago’s guard starters. The team also used three Day 3 picks on interior O-linemen in this year’s draft, but Dozier would have represented a swingman candidate.

A former Jets fourth-round pick, Dozier has started 27 career games. Many of them came with the Vikings in 2020. Dozier started all 16 Minnesota games that year. Last season, he played in six contests as a Vikings backup. Dozier previously served in that role with the Jets, playing out his rookie deal in 2018 and catching on with the Vikes.

To replace Dozier on their 90-man offseason roster, the Bears signed defensive back Jayson Stanley. A UDFA out of Georgia, Stanley has played eight regular-season games — all with the 2020 Seahawks.