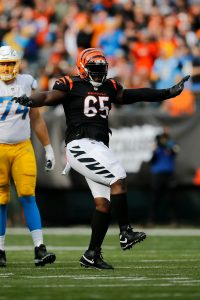 One of the top defenders still on the open market is making another visit today. ESPN’s Adam Schefter reports (via Twitter) that defensive tackle Larry Ogunjobi is being hosted by the Steelers.

The 28-year-old had a three-year, $40.5MM contract in place with the Bears at the onset of free agency. However, days later, a failed physical led to the deal falling through. The injury was suffered in Cincinnati’s Wild Card win over the Raiders, which ended Ogunjobi‘s one-year stint with the Bengals.

The contract he played on – worth $6.2MM – was a relative bargain for the eventual AFC champions, considering his production. Ogunjobi totalled 49 tackles and a career-high seven sacks, continuing his consistent statistical output from his time in Cleveland. With the former third-rounder presumed to be on his way to Chicago, the Bengals pivoted to B.J. Hill, signing him to a three-year extension.

Last month, Ogunjobi visited the Jets, a team which, like Cincinnati last year, has made a number of moves this offseason to bolster its defense. That didn’t result in a deal, though, leaving open the possibility for the Charlotte alum to make a second straight move within the AFC North.

Ogunjobi would be a welcomed addition along Pittsburgh’s defensive line. The team lost Stephon Tuitt to retirement this offseason, leaving an opening for a starting-caliber addition. It had been reported recently, on the other hand, that the Steelers were essentially content at the DL and CB positions, planning to spread Tuitt’s workload around to a number of incumbents. Ogunjobi would fill a significant void, and pair well with Cam Heyward along the team’s defensive interior, as it looks to rebound from last season’s disappointing performance against the run in particular.