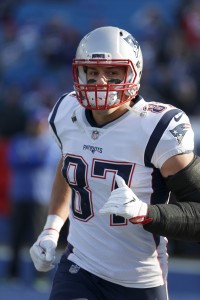 Linked to a possible Buccaneers agreement ahead of training camp, Rob Gronkowski had said another retirement was a true consideration. The future Hall of Fame tight end is following through on that, telling NFL reporter Jordan Schultz he is retiring after 11 seasons (Twitter link). Gronkowski subsequently announced his decision (via Instagram).

Gronkowski, 33, played a key role on the past two Bucs teams, re-emerging from a 2019 retirement to join Tom Brady in relocating to Tampa. His exit will leave the Bucs shorthanded at tight end. O.J. Howard joined the Bills in March. Gronk, who secured a spot on the NFL’s 100th Anniversary team before his Bucs stint began, will leave the game as one of his era’s defining players.

“I will now be going back into my retirement home, walking away from football again with my head held high knowing I gave it everything I had, good or bad, every time I stepped out on the field,” Gronkowski said. “The friendships and relationships I have made will last forever, and I appreciate every single one of my teammates and coaches for giving everything they had as well.

“From retirement, back to football and winning another championship and now back to chilling out, thank you to all.”

The Bucs learned of Gronk’s decision last week, Rick Stroud of the Tampa Bay Times tweets. This transaction will lead to a $5MM 2022 dead-money charge. Gronkowski has resumed his career after this sort of announcement before, and his agent, Drew Rosenhaus, said he would not be surprised if his client answered a call from Brady to return during the season (Twitter link via ESPN.com’s Adam Schefter). For now, however, Gronk retirement No. 2 is upon us.

Barely two weeks ago, the Bucs were confident they could convince Gronkowski to return for another season — one that could end up being Brady’s true finale. But the soon-to-be 45-year-old quarterback will once again soldier on without his top NFL sidekick. Gronk’s 2019 exit resulted in…