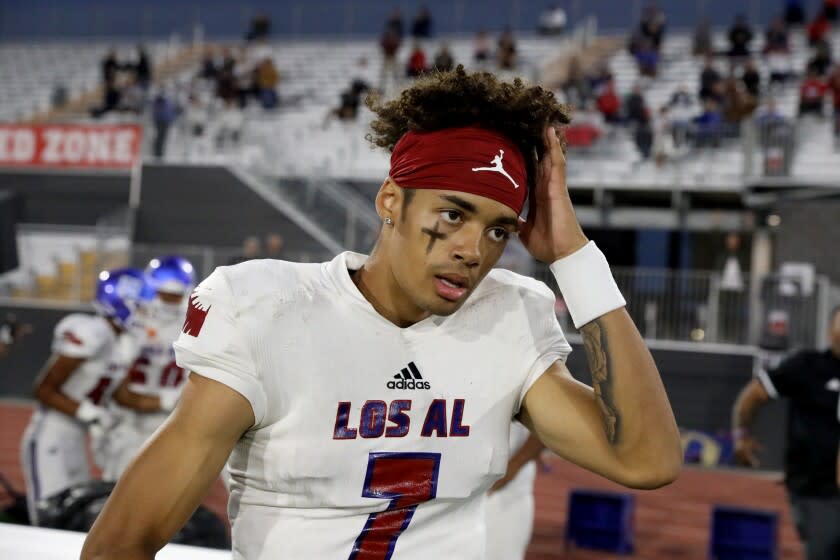 When Malachi Nelson committed last November, the five-star 2023 quarterback from Los Alamitos says he hadn’t had a single conversation with USC about its approach to name, image and likeness.

“I know there are a lot of schools out there where that’s the first thing they’ll talk about,” Nelson told The Times recently. “’We’ll give you this much, we’ll do this, whatever, just to get you here.’”

But that wasn’t part of Lincoln Riley’s pitch to convince the nation’s No. 2 recruit to follow him from Oklahoma, where Nelson had been committed since last summer. Like USC, Nelson preferred a careful approach when it came to cashing in on NIL.

“They’re taking it slow,” Nelson said. “They’re doing it the right way, so they protect themselves and us. I can’t agree with that approach more.”

Nelson recently struck his first announced NIL deal with The h.wood Group, a major hospitality and restaurant company with 13 restaurants and nightlife venues in the Los Angeles area, including SLAB, a popular barbecue and smoked meats spot that Nelson said ranks among his family’s favorites.

For Nelson, that connection was a crucial part of his first NIL partnership.

“A lot of people, they just see money and they take it,” Nelson said. “That’s not where my head is at. I want to take deals that align with my beliefs and what I think and what I like. Not doing things solely for the money, but something I can really connect to and be genuine in putting out.”

The specific terms of Nelson’s deal were not disclosed. But as part of that partnership, Nelson will be expected to promote the group’s restaurants on social media, partner on menu collaborations and host tailgate events featuring SLAB during the upcoming USC football…