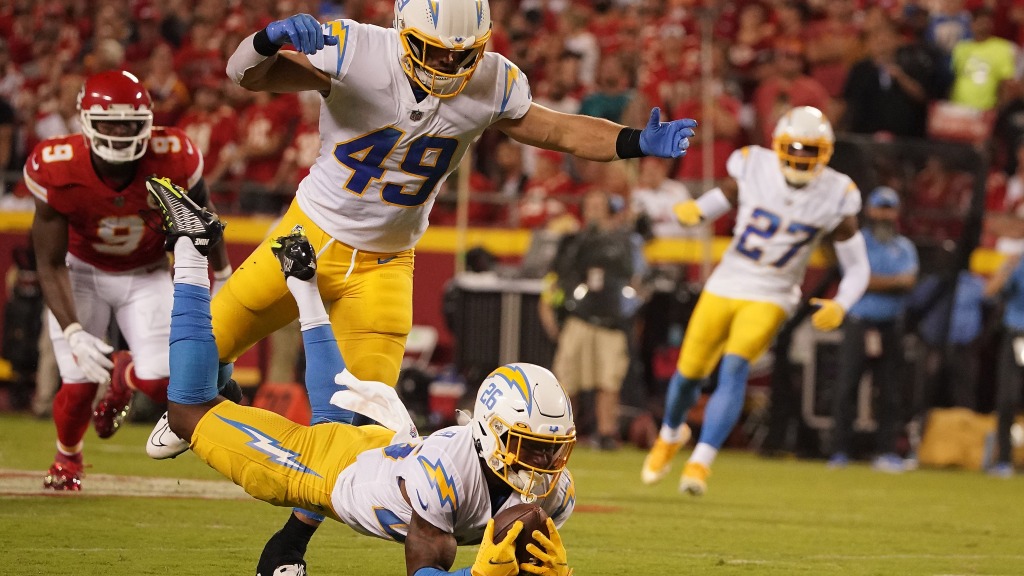 Kansas City Chiefs QB Patrick Mahomes was the first to admit that he didn’t play his best football on Thursday night.

Fresh off a dominant performance in Week 1, things didn’t come as easy to the former MVP quarterback in Week 2 against the Los Angeles Chargers. The game was so rough that Mahomes expects an even lower PFF grade than the eighth-place grade he earned in Week 1.

He credited the defense for keeping the Chiefs in the game and the offensive line for battling, but he knew that he could do better. Mahomes felt very fortunate after the game because there were several occasions where he threw interceptions, but they were nullified by defensive penalties. There was also the near-interception that was ruled an incomplete pass.

“First off, I’m livin’ right, because I had a couple of interceptions that didn’t get called because there were flags and then that one got overturned when it hit the ground,” Mahomes said following the game. “I have to stop giving them even chances. It’s just too close sometimes and I’m going to make sure I get better at that.”

On the play the interception that was reviewed and overturned, Mahomes didn’t know whether it would or wouldn’t be ruled an interception.

“I mean you never know,” Mahomes said. “I think that’s — you saw the ball hit the ground, you saw a little bit of movement — but they have been a little bit more lenient on letting the ball move and if the guy gets his hands underneath it.”

He was preparing for both outcomes, but he also knew that the defense tricked him into throwing it to the defender on that particular play.

“So, you hope that it’s overturned obviously, but on the play they got me,” Mahomes explained. “They were all game. They were playing one coverage and out of nowhere they threw me with a shell coverage with a corner who had been playing just kind of getting out of there the whole time. He dropped down to play cover 2 and so it got me. I don’t throw just straight to guys most times and so (we) got lucky enough that it bounced around, hit the ground and I was able to get another chance at it.”

While Mahomes expects a poor PFF grade, he’s clearly not too bent out of shape about it. At the end of the day, all that matters is that the team got the win and that he keeps working to improve his craft and get better.

“I’m sure PFF will have me at a low grade for that, but I’ll keep rolling,” he said.