Studs and duds from Week 2 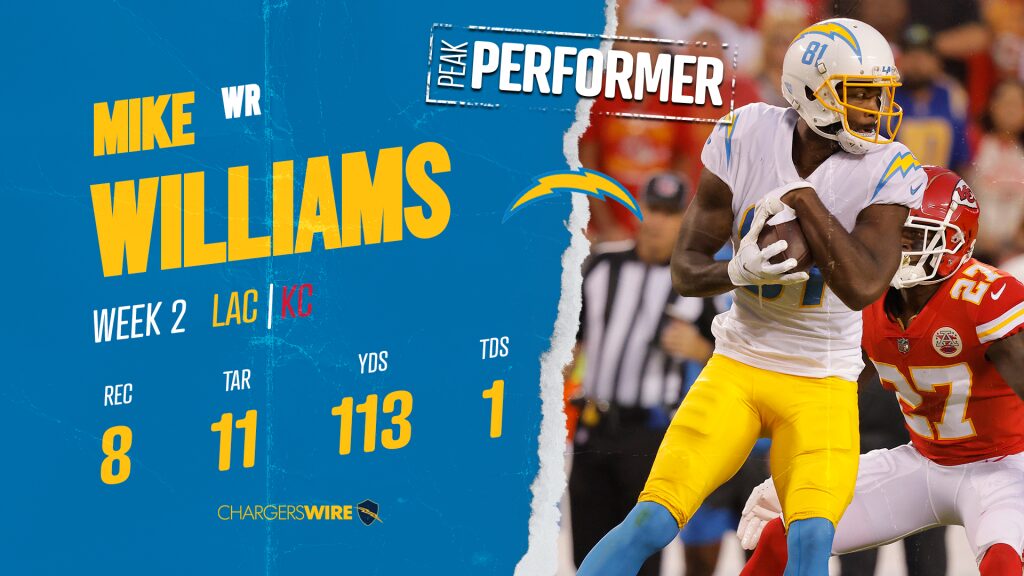 Despite a 27-24 loss to the Chiefs, the Chargers played well on Thursday night in Arrowhead Stadium.

However, as always, a few players did more to stand out, whether in good or bad ways.

Here are Los Angeles’ studs and duds from Week 2:

There was a lot of concern about Williams’ involvement, or lack thereof, in Week 1. But without Keenan Allen and in Arrowhead Stadium, a place Williams has historically thrived, the 27-year-old showed why LA paid him $20 million a year this offseason. With eight catches for 113 yards and a touchdown, Williams was Herbert’s favorite target all game, even late in the game with Kansas City dedicating two defenders to him. It’s the third time Williams has had at least six catches and 100 yards against the Chiefs in his last four matchups with them. The touchdown in the third quarter was Williams’ 7th at Arrowhead, the most by a visiting player in stadium history.

Lombardi once again got stuck in a rut as a play-caller, relying on short passing concepts like stick far too often for a team with a QB as physically gifted as Justin Herbert. The Chargers refused to get Austin Ekeler going early for the second straight game, giving Chiefs defensive coordinator Steve Spagnuolo the go-ahead to adjust out of his normal Cover 0 and Cover 1-heavy scheme and play further back to keep things in front of his Chiefs defense. Lombardi never adjusted and kept calling short concepts – their first pass of over 30 air yards came late in the fourth quarter as Los Angeles tried to come back. Kansas City also jumped the stick concept at the goal line for rookie Jaylen Watson’s pick-six that turned the tide for good. Lombardi has received a lot of criticism during his tenure, a lot of it unfairly so. But tonight, his refusal to adjust the game plan and attack the Chiefs’ defense lost the Bolts’ the game.

Tranquill was all over the field, especially in the first half. In the first quarter, Tranquill instantly beat right tackle Andrew Wylie while Khalil Mack came into the pocket unblocked, giving Patrick Mahomes nowhere to escape and leading to a Mack sack. In the second, Tranquill had a key run fit on third and one that forced the Chiefs to punt from around midfield. He and Kenneth Murray Jr. have looked like better players than they were a season ago. Whether that’s because the defensive line is keeping them cleaner or because they feel freer in year…