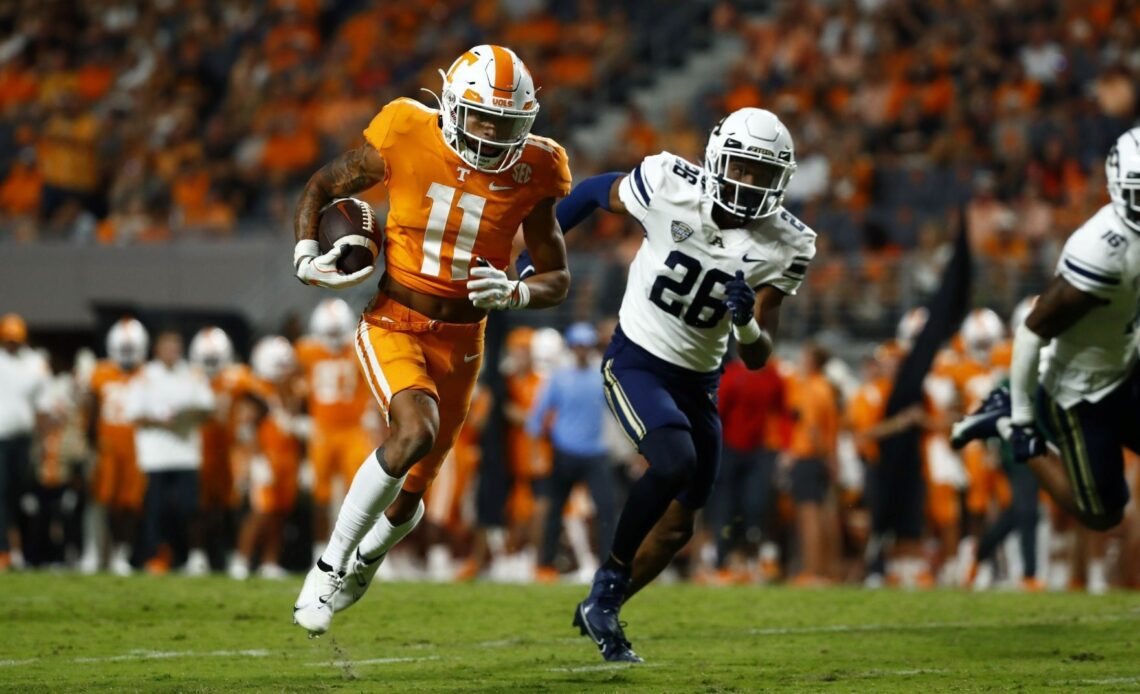 KNOXVILLE, Tenn. – No. 15/16 Tennessee rolled up 35 points and 416 yards of total offense in the first half and cruised to 63-6 victory over Akron Saturday night in front of a sellout crowd of 101,915 at Neyland Stadium.

The packed house vs. the Zips (1-2) marked the first for the Vols (3-0) in a home game vs. a non-conference foe since the Big Orange faithful filled the historic venue vs. Oklahoma on Sept. 12, 2015.

UT quarterback Hendon Hooker was stellar in the opening 30 minutes and early third quarter before retiring to the home sideline. The redshirt senior produced 251 yards passing on 13-of-17 accuracy in the first half and ended the evening 14 of 18 for 298 yards and two scores.

Hooker now has thrown a touchdown pass in 15 straight games, which is three shy of the school record of 18 set by Heath Shuler from Oct. 17, 1992, to Jan. 1, 1994. Hooker also improved his total to 37 TD tosses as a Vol, ranking seventh all-time on Rocky Top.

Junior receiver Jalin Hyatt and running backs Jaylen Wright and Dylan Sampson had two touchdowns apiece to lead the offense, which accumulated 676 yards of total offense for the fifth-highest total in school history. It marks the third time UT has racked up 600+ yards of total offense under Josh Heupel and stands as the most points scored and largest margin of victory in a game under his leadership.

Hyatt caught four passes for career bests of 119 yards and two touchdowns in the first half alone and finished with five for 166 and two TDs, tallying three catches for 47 yards or more. Wright, a sophomore, carried for 96 yards and two scores on 23 attempts, while Sampson, a freshman, tallied eight rushes for career-best totals of 57 yards and two TDs.

Defensively, the Vols blanked Akron in the first half and didn’t allow points until 7:35 remained in the third period. The Zips were held to 276 yards of total offense, including only 35 on the ground. The Big Orange had 11 tackles for losses, including four sacks. Freshman linebacker Elijah Herring had two of those quarterback takedowns to lead the way, while fellow linebacker Jeremy Banks was tops in total stops with five.

Following an exchange of punts early in the opening quarter, the Vols got on the scoreboard first. A 27-yard, third-down scramble by Hooker and a 19-yard pass from Hooker to redshirt senior tight end Princeton Fant helped move Tennessee 74 yards in only seven plays. Wright capped the drive of just under two…