No. 3 Ohio State vs. Toledo 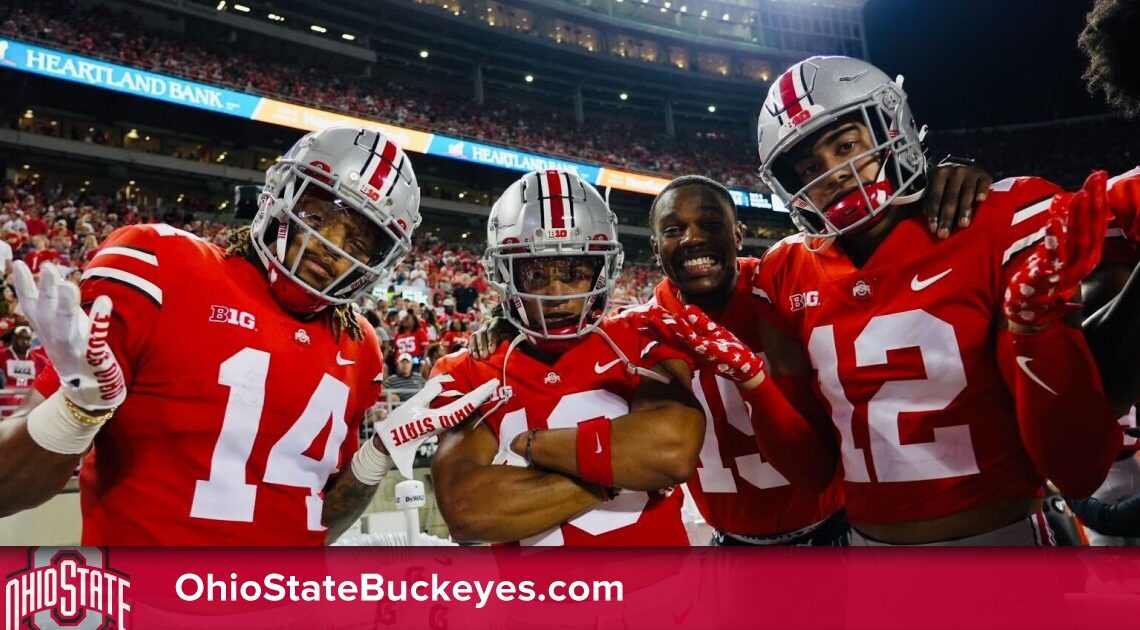 Ohio State won the opening coin toss and elected to take the ball. After a kickoff return to the Toledo 18, C.J. Stroud quickly orchestrated the game’s first scoring drive, which culminated with a 7-yard TreVeyon Henderson rush over right tackle for a 7-0 lead. The drive covered 84 yards on eight plays while taking 3:45 off the clock.

Stroud completed all four pass attempts for 63 yards on the drive, the long being a 38-yard grab by Cade Stover down the right sideline.

Toledo responded to tie the game at 7-all on a 50-yard touchdown pass from Dequan Finn to Thomas Zsiros. The drive took just 48 seconds and covered 75 yards on four plays.

Undaunted, Stroud again drove the Buckeyes for the go-ahead score, this time connecting with Marvin Harrison Jr., for an 8-yard touchdown in the front left corner of the endzone. Harrison Jr. just got a toe down to make it 14-7 Buckeyes after a six-play, 75-yard drive over 2:33.

Over the first two Ohio State scoring drives, Stroud completed all eight of his pass attempts for 132 yards and a touchdown.

The Rockets were stifled on its next possession and punted. The Buckeyes took the ball on their 41 and five plays later went up 21-7 on a 3-yard Emeka Egbuka rush over the right edge. The big play of the drive was a 42-yard Harrison Jr. reception to the Toledo 3-yard line. The drive used 1:59 of clock time and covered 59 yards.

Ohio State’s defense again stopped the Rocket offense, forcing the second Toledo punt of the game. After a 37-yard boot, the Buckeyes started on the OSU 29.

The first three plays of the Ohio State drive resulted in first downs on plays covering 21, 19 and 10 yards.

The Rockets called timeout but Stroud found Stover for 11 yards to the Toledo 10, Ohio State’s fourth-consecutive play for a first down. A 5-yard rush by Miyan Williams, who replaced Henderson after Ohio State’s first possession, the Buckeyes found the endzone again improve the lead to 28-7.

The score was a 5-yard grab by Julian Fleming along the right edge of the endzone to end a 7-play, 71-yard drive.

Toledo ran one play following a touchback to end the quarter.