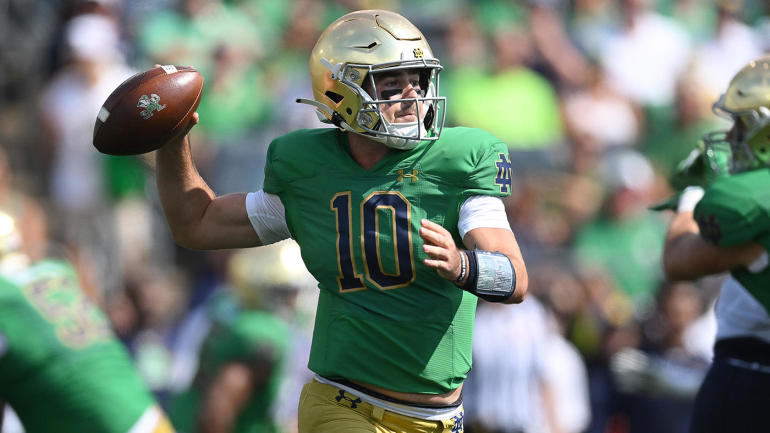 Notre Dame stared down the barrel of its first 0-3 start since 2007 on Saturday before rallying with 10 fourth-quarter points to beat Cal 24-17. It was a much-needed win on multiple levels; in avoiding their worst start since the Charlie Weis era, the Fighting Irish also handed Marcus Freeman his first career victory after he became the first coach to debut in South Bend with an 0-3 record dating back to last season’s Fiesta Bowl loss to Oklahoma State.

The Fighting Irish trailed 10-7 at halftime with quarterback Drew Pyne’s making his first career start. The deficit brought out some boos from the home crowd, but the Irish put together scoring drives on their first three possessions of the second half to surge ahead. From there, their defense stepped up repeatedly, shutting out the Golden Bears for the final 24 minutes of game time.

Cal quarterback Jack Plummer heaved a pass to the end zone on the game’s final play, which was batted around before finding its way to the turf after it was nearly caught and nearly intercepted. A Cal touchdown would have been particularly gut-wrenching after two Golden Bears turnovers forced by the Fighting Irish were wiped out by video reviews earlier on the drive. In the end, though, the series went down as a fourth consecutive stop for Notre Dame’s defense to close the game.

While defense set the tone, there were encouraging signs from the offense. Pyne stepped in for Tyler Buchner, who is expected to miss the rest of the season after suffering a sprained AC joint in last week’s loss to Marshall. The former four-star prospect started out just 3 for 8 through the air as the Fighting Irish punted on their first four possessions. But then Pyne settled in nicely and completed 14 of his final 15 passes with a pair of touchdowns in that stretch. His 6-yard strike to tight end Matthew Mayer with 9:16 left gave Notre Dame the lead for good.

Notre Dame plays at North Carolina next week before an open week gives it a chance to recoup following a stressful beginning to Freeman’s tenure.