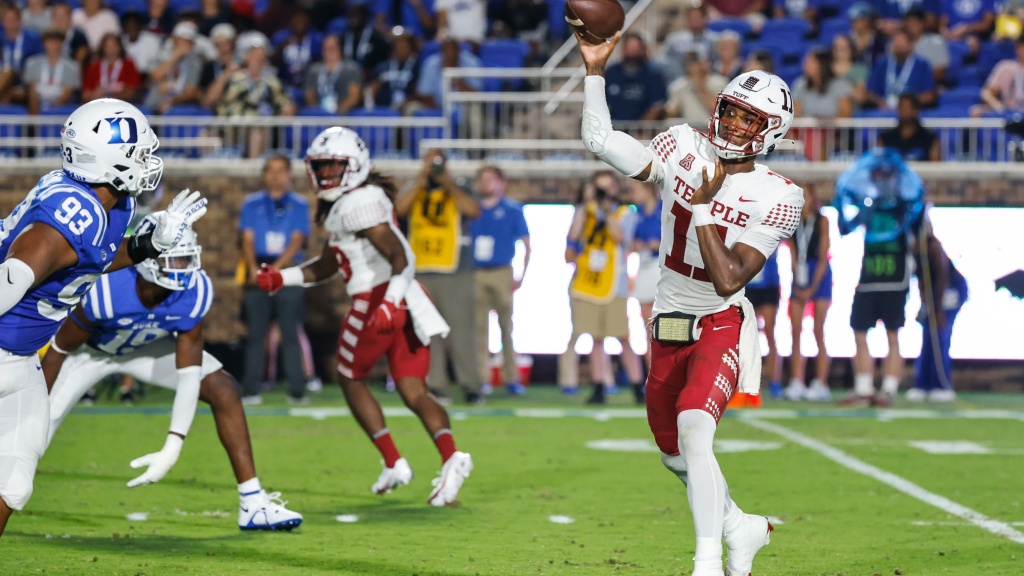 PISCATAWAY, N.J. — Much like the Rutgers football program, Temple has their own quarterback competition. And not unlike Rutgers, Saturday’s opposition has no idea who will start for the Owls or which quarterback will get the most snaps.

And the quarterback situation looms large for the head coaches on either sideline.

In last season’s opener for both teams, D’wan Mathis got the start for Temple in what was a rocky Temple debut for the quarterback (8-of-24 for 148 yards with an interception and three sacks) in a 61-14 loss at Rutgers. The offensive struggles have continued for Temple, which led to the mid-game insertion of E.J. Warner into last week’s win over Lafayette.

A freshman, Warner was an impressive 14-of-19 for 173 yards with two touchdowns. Temple could go with the more experienced Mathis on Saturday against Rutgers or roll with Warner.

“The one guy, No. 11 – Mathis is 6-foot-6, rangy guy, strong arm guy – can run. And you know Warner is a smaller guys 5-11, 6-foot. Very accurate. Seems to know the offense very well; gets rid of the ball quickly,” Rutgers head coach Greg Schiano said on Wednesday.

“He’s not going to hold on to it. Really manages the game well and when I say that that’s not with any disrespect. I  love guys who get rid of the ball fast… get it out of your hand, get it out of your hand and let the playmakers go do their job. And that’s what he does. So yeah, it’s two different quarterbacks. We have to have different plans. We have to be ready for each of them. So does that add to our workload a little bit for our players a little bit? Sure.”