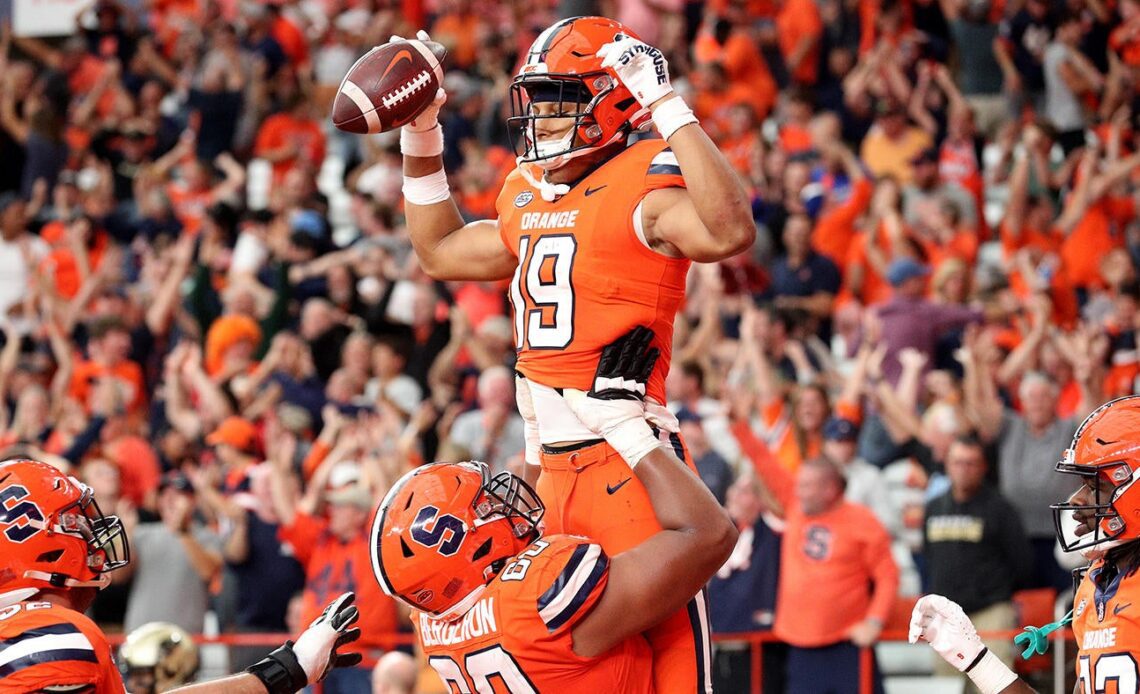 A quiet first half between Purdue and Syracuse gave way to big plays from both teams in the second half, and what appeared to be a defensive struggle for most of Saturday afternoon turned into a back-and-forth game with a wild finish. Ultimately, the Orange prevailed with a go-ahead score to take the 32-29 win over the Boilermakers.

The action intensified with a large-man pick six for Syracuse in the second half; however, things really got wild with 51 seconds remaining in the game when Purdue quarterback Aidan O’Connell found tight end Payne Durham in the end zone to give his team a 29-25 lead. In that moment, it seemed like the Boilermakers were about to steal a quality win on the road, but then the mistakes started coming in bunches.

The Orange were able to return the kick to midfield, setting up scoring opportunities with plenty of time remaining. The costly errors from Purdue only continued from there. On a third-and-10, defensive back Bryce Hampton was flagged for holding, which gave Syracuse a free first down.

Hampton was then called for pass interference a few plays later, which gave the Orange a fresh set of downs on the Purdue 25-yard line. That’s where Syracuse quarterback Garrett Shrader stepped up and made a big play. With just 12 seconds remaining in the game, Shrader dropped in a beautiful pass to receiver Oronde Gadsden for the go-ahead touchdown.

More unsportsmanlike penalties by the Boilermakers led to the Orange kicking off from the Purdue 35-yard line, and they were able to close out the game from there. After the Boilermakers took a lead with under one minute remaining, Syracuse did not have to run a play in its own territory because of all the Purdue penalties.

With that thrilling win, Dino Babers and Syracuse are now 3-0 for the first time since 2018. Next week, the Orange will shoot for a 4-0 start with a home game against Virginia.

This is now the second gut-wrenching loss of the season for Purdue, which falls to 1-2. The Boilermakers also lost to Penn State in the closing seconds of their Week 1 matchup. Purdue gets a nice rebound opportunity with FAU…