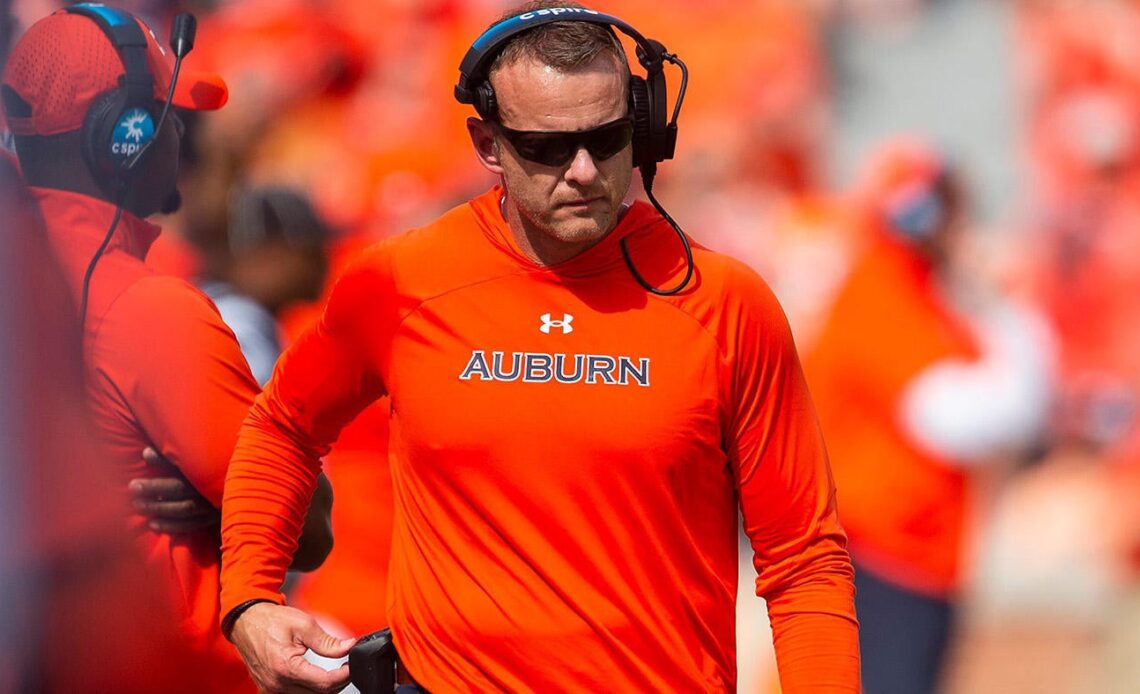 When Auburn met No. 22 Penn State last season, it was an opportunity for an exciting win early on in Bryan Harsin’s tenure. One year later, the matchup at Jordan-Hare Stadium on Saturday was a tenure-saving opportunity. That’s how fast the narrative can change in the SEC.

Unfortunately, the worst-case scenario was on display as the Tigers were dominated in every aspect during a 41-12 loss to the Nittany Lions. Auburn averaged just 3.3 yards per carry and let Penn State quarterback Sean Clifford move the ball at will. Freshman Lions running back Nicholas Singleton outplayed his counterpart, Tank Bigsby, by a mile, while both T.J. Finley and Robby Ashford threw interceptions.

The seat was already hot for Harsin after a brutal offseason and poor showing against San Jose State a week ago. With bad Missouri and LSU teams on the horizon, the embarrassing, ineffective loss to Penn State in front of 87,000 strong may be remembered as the moment that Harsin ran out of rope.

Here are more winners, losers and overreactions from around the college football world in Week 3.

Washington: The Huskies scored a combined 97 points against Kent State and Portland State, but a battle with No. 11 Michigan State proved the gaudy offensive numbers were no fluke. Transfer quarterback Michael Penix Jr. was in his bag, throwing for 397 yards — hitting nine different receivers — and four touchdowns against a high-profile Big Ten opponent. Washington was one of the worst offenses in college football a year ago, scoring just 21.5 points per game in a 4-8 season. Coach Kalon DeBoer has quickly turned things around, and now has the Huskies as a serious contender in the Pac-12 after tonight. Washington should be the biggest poll riser on Sunday.

Basketball schools: The biggest and best in college basketball are dominating on the gridiron. North Carolina and Kentucky were projected to be contenders. Kansas, Duke, Syracuse and Indiana were all supposed to be cellar-dwellers. Well, surprise! The basketball powers are a combined 18-0 three weeks into the season, including a perfect 6-0 against Power Five competition. Ironically, the schools with basketball titles since 2000 that are supposed to have the best football — Baylor, Florida and Michigan State — all have losses.

Oklahoma: The No. 6 Sooners handed Nebraska one of its darkest losses in program history with a 49-14 decision that…