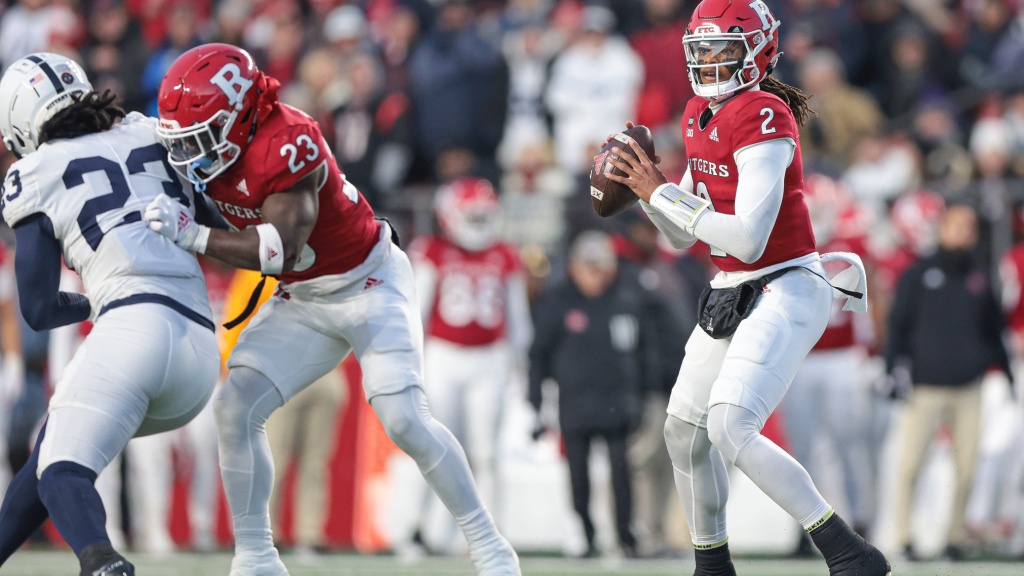 PISCATAWAY, N.J. — The growth of Gavin Wimsatt continues its ebbs and flows, this as the young quarterback had a rough outing on Saturday night against No. 11 Penn State.

Wimsatt, who sparkled the week before at Michigan State, had a strong start to the game but then had some struggles. He finished 10-of-29 for 122 yards with a touchdown and an interception in a loss to Penn State.

The offense as a whole struggled, just a week removed from 460 yards of total offense and 25 first downs. For head coach Greg Schiano, speaking after the game, the struggles from the offense and Wimsatt in particular were dual-based.

His quarterback didn’t play with the same patience as the week before, but he also didn’t get support from the running game.

“Gavin was a little sped up tonight. And what do I mean by that? I’m not sure -I want to watch the tape. He wasn’t as process-driven as he was a week ago,” Schiano said on Saturday following the game.

“Now some of that has to do with the defense. Some of it has to do with the run game a week ago (which) kind of put us in better positions. But still, we didn’t do a good enough job getting him ready, because when he sped up, he wasn’t as good as he can be. So that’s part of it.”

Big picture, it is obvious at this point that the program’s future rests on the foundation being put in place this season at Rutgers.

A former four-star quarterback, Wimsatt has clearly grown and matured since his arrival last year. It is easy to forget that Wimsatt arrived last fall when he should have been in the midst of his senior season of high school.

At a time when he should have been planning for homecoming, Wimsatt was at Rutgers last year learning the offense and getting limited snaps to accelerate his development.

It means that Wimsatt, both physically and in terms of his growth being able to read defenses, is still a young player.

“Again, individuals and programmatically, it’s not going to be a — he had a…