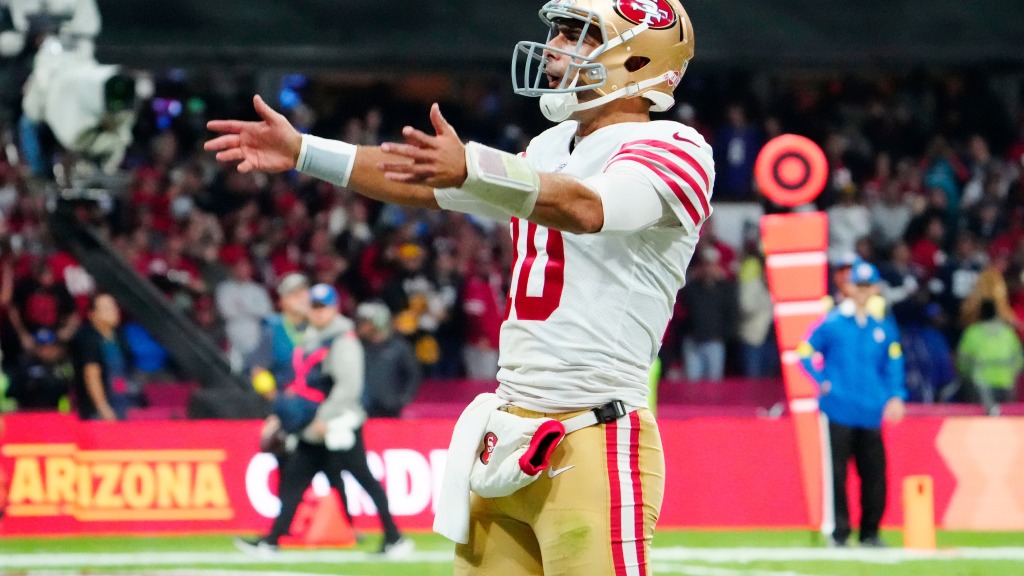 Jimmy Garoppolo’s performances this season may be surprising some, but they are of no shock to Kyle Shanahan.

Garoppolo was excellent again on Monday Night Football as the 49ers rolled to a 38-10 win over the Arizona Cardinals in Mexico City to surge the top of the NFC West at 6-4.

He completed 20 of his 29 passes for 228 yards and four touchdowns in arguably the 49ers’ best offensive performance of the season, stringing together a third successive game without an interception for the first time in his career.

For the season, Garoppolo now has 15 passing touchdowns to just four interceptions, with his outstanding primetime showing seeing him spread the ball around among San Francisco’s litany of offensive weapons.

Brandon Aiyuk and George Kittle each scored a pair of touchdowns and Christian McCaffrey and Deebo Samuel each went over 100 yards from scrimmage, the latter scoring a 39-yard rushing touchdown in an emphatic display of how devastating Shanahan’s offense can be.

On an international stage, it was a reminder of how well Garoppolo can run that offense, not that the 49ers head coach needed one.

“When Jimmy has been healthy for us and he has his guys out there, he plays at a very high level,” Shanahan said in his post-game press conference.

While Shanahan singled out his quarterback for praise, the efforts of the team as a whole have impressed him as the Niners have ripped off a three-game winning streak.

After Monday’s blowout win, to say the 49ers are gelling may be an understatement. This is a team teeming with talent hitting its stride at exactly the right time. The 49ers are on a roll and, with Garoppolo leading an attack of this potency, they’ll be extremely difficult to stop.