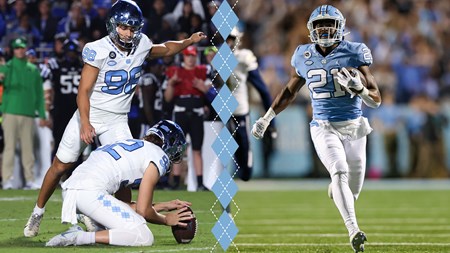 
Tar Heels Noah Burnette and Elijah Green have earned spots on the 2022 Academic All-District Football Team, as announced Tuesday by the College Sports Communicators. The award goes to student-athletes who have been standouts academically and athletically during the 2022 season and requires a cumulative GPA of 3.5 or better.

“I couldn’t be prouder of Noah and Elijah on this recognition,” said UNC head football coach Mack Brown. “It’s not easy to have a 3.5 GPA at the University of North Carolina, especially when you consider all of the demands on football players. These two are bright young men, who are outstanding representatives of our football program and the University, and I want to congratulate them on this much-deserved honor.”

Green is a business administration major from Roswell, Ga. A sophomore running back, he earned his first significant playing time at running back against Duke and has been the starter ever since. Green has posted 388 rushing yards on 69 carries for a 5.2 yards-per-carry average and scored seven TDs. He’s also caught 10 balls for 69 yards and a TD. Green has also been a member of all special teams units, making three tackles on the year.