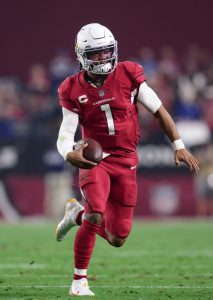 The Cardinals suffered a lopsided defeat on Monday, but they could have their starting quarterback available this week when they attempt to get back on track. Signs are pointing towards Kyler Murray returning in Week 12.

Head coach Kliff Kingsbury described Murray on Wednesday as “definitely trending in the right direction” to be available on Sunday. The 25-year-old himself added that he expects to suit up against the Chargers (Twitter links via team reporter Darren Urban). That would mark his first game action since Week 9.

Veteran backup Colt McCoy has filled in for Murray over the past two games, including an impressive win over the Rams and Monday’s blowout loss to the 49ers. It was reported earlier this week that the Cardinals were at least considering keeping Murray sidelined for this week, as it is Arizona’s final game before their bye. Instead, the former No. 1 pick will apparently have the opportunity to test out his hamstring before then.

Murray has had a down year amidst the Cardinals’ continued struggles on offense this season. The Oklahoma product has posted a career-low passer rating of 86.9 while throwing 12 touchdowns and six interceptions. His rushing ability (359 yards and two touchdowns) has been a factor in his play as well, as always, but Murray’s performance has fallen short of expectations to date.

That has taken on added significance given the massive extension he signed this summer, just months after Kingsbury and general manager Steve Keim inked long-term deals of their own. With the team being unable to correct the mistakes of years past, and relations with Murray having seemingly taken a downturn, Kingsbury is reportedly under increased danger of being let go no later than the conclusion of this season.

Against that backdrop of potentially added urgency, Murray will look to return to full health and provide a boost to the team’s middling offense. At 4-7, a playoff push may not be entirely out of the question if a winning streak starts soon, including as early as Sunday against the 5-5 Chargers.