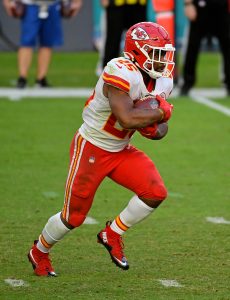 The Chiefs will move forward without Edwards-Helaire in the near future, having placed him on IR. This will shut down CEH for at least four weeks. Kansas City had already changed the LSU alum’s role, though this certainly does impact the AFC West kingpins’ depth.

Coming into this season, Edwards-Helaire — thanks partially to Damien Williams‘ 2020 opt-out — had started every NFL game in which he played. But injuries led to the college dual threat missing 10 regular-season games and two playoff tilts. Edwards-Helaire then took a backseat to Jerick McKinnon upon returning from his second 2021 injury — a shoulder issue — in the postseason. CEH had already sustained an MCL sprain earlier in 2021; he missed time due to ankle and hip maladies in 2020.

McKinnon re-signed midway through this offseason, but the Chiefs have begun using seventh-round rookie Isiah Pacheco over both vets. Pacheco has totaled 31 carries over the Chiefs’ past two games. Edwards-Helaire was on the field for four offensive snaps during the Chiefs’ Week 10 win over the Jaguars, and his injury against the Chargers stands to set him back further.

The 5-foot-8 back has gained 302 rushing yards on 71 carries this season. While extended absences are not new for the former No. 32 overall pick, Pacheco’s presence has changed the Chiefs’ backfield equation. This injury also opens the door for Ronald Jones resurfacing. The offseason addition has not dressed for a game yet as a Chief but remains on their 53-man roster. Andy Reid said (via ESPN.com’s Adam Teicher) the former Buccaneers starter has a chance to play, though he cited multiple issues that may deter Jones from seeing a backfield role.

With CEH out and McKinnon having two full-season injury absences on his resume, the Chiefs suddenly may need Jones, whom they signed to a one-year, $1.5MM deal.

Additionally, the Chiefs activated Lucas Niang from the reserve/PUP list. The team’s right tackle to open last season, Niang suffered a ruptured patellar tendon in Week 17 of last season. The former third-round pick has not been available much during his KC career. He opted out of the 2020 season and has now missed 15 regular-season games since. The Chiefs have used veteran Andrew Wylie primarily at right tackle this year. Niang, who made…