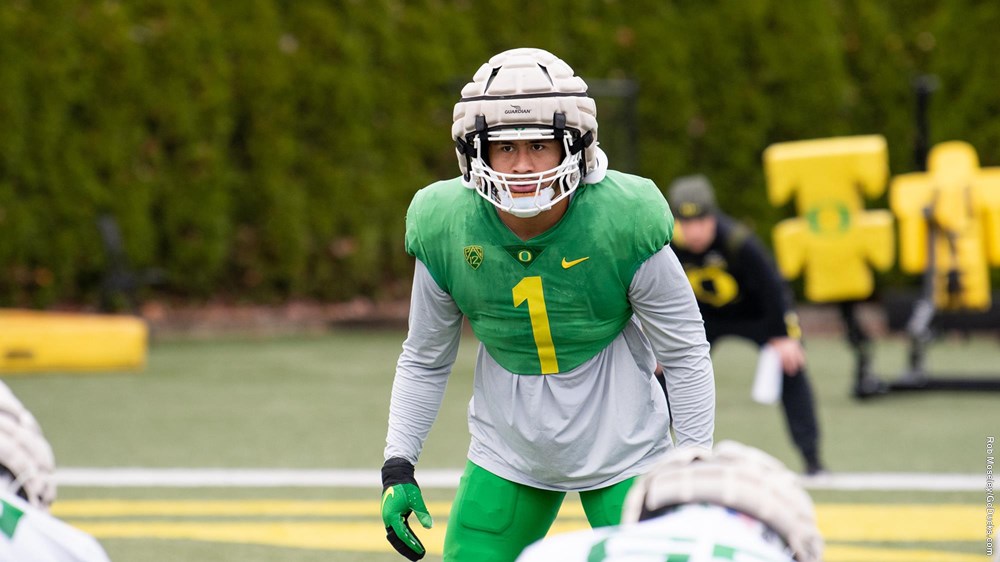 A physical defense that makes points hard to come by, and an offense built around running the ball – yes, the basic formula sounds similar for the Ducks as they prepare for their regular-season finale.

“They’re physical up front – a lot like Utah,” UO defensive lineman Taki Taimani said. “A lot of good players up there. It’s going to be exciting.”

Like Utah, Oregon State has found success with its formula. The Beavers enter Saturday’s rivalry game at 8-3, and at No. 21 in the latest College Football Playoff rankings.

OSU entered the season with a stable of backs, but in recent weeks Damien Martinez has emerged as the bell cow. Running behind one of the best offensive lines in the country, Martinez rushed for 138 yards and two touchdowns last week at Arizona State.

Oregon’s defensive front will be on alert.

“The biggest thing for us is setting the edge, for the OLBs,” said one of those UO outside linebackers, Mase Funa. “And the D line getting knock-backs.”

At quarterback, meanwhile, OSU has benefited from the emergence of Ben Gulbranson. The Beavers are 5-1 since he took over in early October; in wins over Cal and ASU the past two weeks, Gulbranson completed nearly 70 percent of his passes and rushed for a touchdown in each game.

So they Ducks won’t solely be able to focus on stopping the run Saturday. But they definitely respect the formula Oregon State has used to such effect this season.

Notable: After practice Thursday, the Ducks will have a Thanksgiving feast available in the Hatfield-Dowlin complex. Lanning said position coaches will then invite players over for Thanksgiving dinner at their houses. … In the post-practice huddle Wednesday, Lanning encouraged players to take time throughout the holiday weekend to offer thanks to those who’ve helped them in their lives.