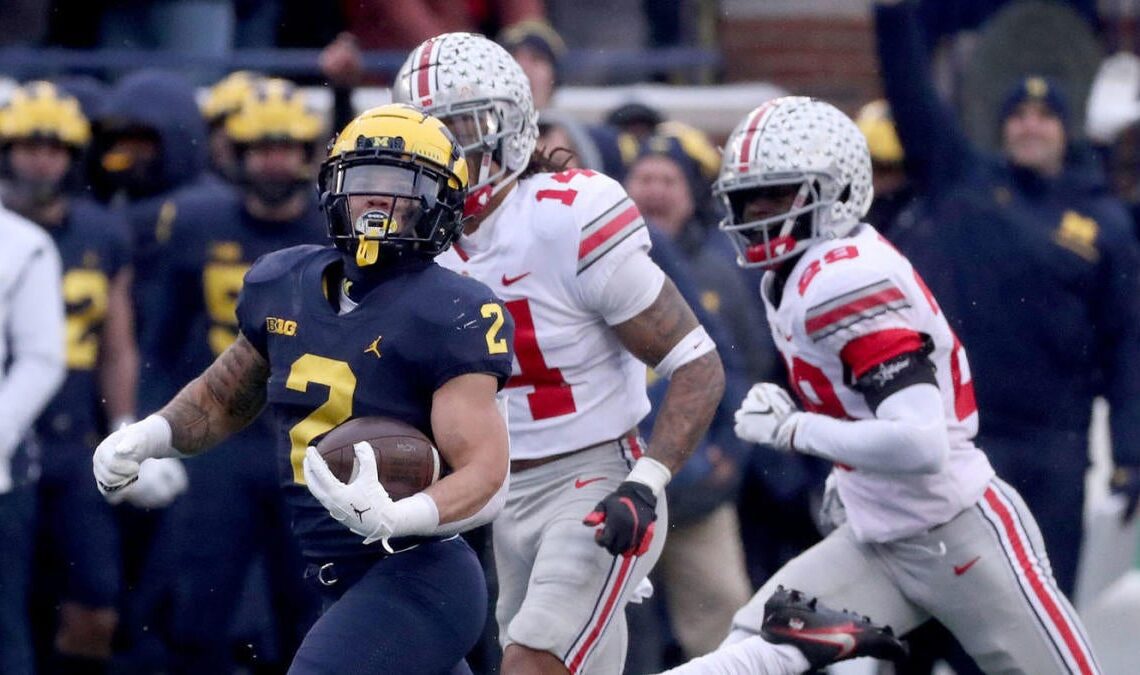 At long last, the showdown between No. 2 Ohio State and No. 3 Michigan is here, and the stakes couldn’t be higher. Bragging rights, the Big Ten East and, potentially, a College Football Playoff spot are all on the line. For Ohio State, revenge is also a factor as the Buckeyes prepare to host the Wolverines on Saturday following last season’s embarrassing loss to their arch rival.

But for their similarities as 11-0 Big Ten East teams, there is a major difference in their résumés. That difference is the nonconference victory over Notre Dame that Ohio State secured in Week 1. While Michigan breezed through a laughable nonconference slate of Colorado State, Hawaii and UConn, the Buckeyes tested themselves against a quality opponent that has quietly put together a solid season.

The Fighting Irish are up to No. 15 in this week’s College Football Playoff Rankings and have a chance to rise even higher if they take down No. 6 USC on Saturday night. If Ohio State doesn’t beat Michigan, Buckeyes fans should transform into serious Notre Dame fans on Saturday evening. If Notre Dame beats USC, it would eliminate the Trojans from CFP contention and make Ohio State’s Week 1 victory over the Fighting Irish look even more impressive.

In that scenario, the Buckeyes would have a real shot at making the CFP as a one-loss team. But if Michigan loses? Tough luck. The Wolverines’ best victory — and only victory vs. a ranked team — would be an Oct. 15 home win over Penn State.

Michigan has no one to blame but itself for why the stakes are so high here. The Wolverines were supposed to play UCLA this season but canceled their series with the Bruins in 2019 and reportedly paid $1.5 million to do so. Instead, they added a game with Hawaii.

UCLA is ranked No. 18 this week while Hawaii is sitting at No. 127 in the CBS Sports 131. Even if Michigan had played UCLA and lost in Week 2, it wouldn’t have been a hindrance to the Wolverines’ CFP hopes. A road win over Ohio State and a victory in next week’s Big Ten Championship Game would absolutely have gotten the Wolverines in the College Football Playoff as a one-team loss squad.

On the flip side, a win against the Bruins in Week 2 would have given Michigan the same cushion Ohio State now enjoys.

Instead, the Wolverines backed themselves into a corner with a poor schedule and unnecessarily made the stakes for the biggest game of their season…