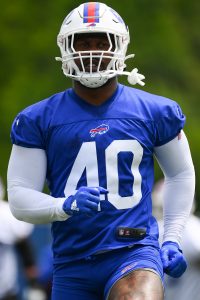 On a day when the Bills welcomed back one of their top defensive players, another exited the contest early. Von Miller was carted off the field late in the second quarter, leaving Buffalo without their top pass rusher.

The Bills immediately ruled Miller out for the remainder of their Thanksgiving tilt against the Lions, leading to widespread speculation that a major injury had occurred. The initial diagnosis appears to be more positive, however. NFL Network’s Ian Rapoport reports that the team believes Miller suffered a knee sprain, with more tests to come tomorrow (Twitter link).

While that news is relatively positive, Rapoport adds that a far more serious diagnosis could be coming in the near future. In a follow-up, he notes that Miller will miss some time in 2022; the important matter will now become how much. A torn ACL or similar ailment would end his season, and put a significant dent in Buffalo’s Super Bowl aspirations given his effectiveness during his debut season as a Bill.

Miller entered today’s game in a tie for 10th in the league in sacks this season (8.0). That has represented a good return on investment for Buffalo, who inked the future Hall of Famer to a six-year, $120MM deal in free agency. He has led a Bills pass rush group which ranks mid-pack in sacks, but has helped the team’s defense allow the fifth-fewest points per game (17.4) in 2022.

Buffalo’s front seven was already without Gregory Rousseau and A.J. Epenesa for today’s game, so their edge rush will be particularly shorthanded for the remainder of the contest. Concern will linger well beyond the immediate future in Miller’s case, though, at least until more is know about the extent of his injury.

On a more positive note, the preseason Super Bowl favorites saw No. 1 corner Tre’Davious White make his return this afternoon. The two-time Pro Bowler had been sidelined while recovering from a torn ACL; while his snap count against Detroit will likely be limited, he will provide a significant boost to Buffalo’s secondary when he resumes a full-time starting role. A return to his top form could be especially needed if Miller misses extended time.