Last-minute thoughts and prediction for the Lions vs. Bills 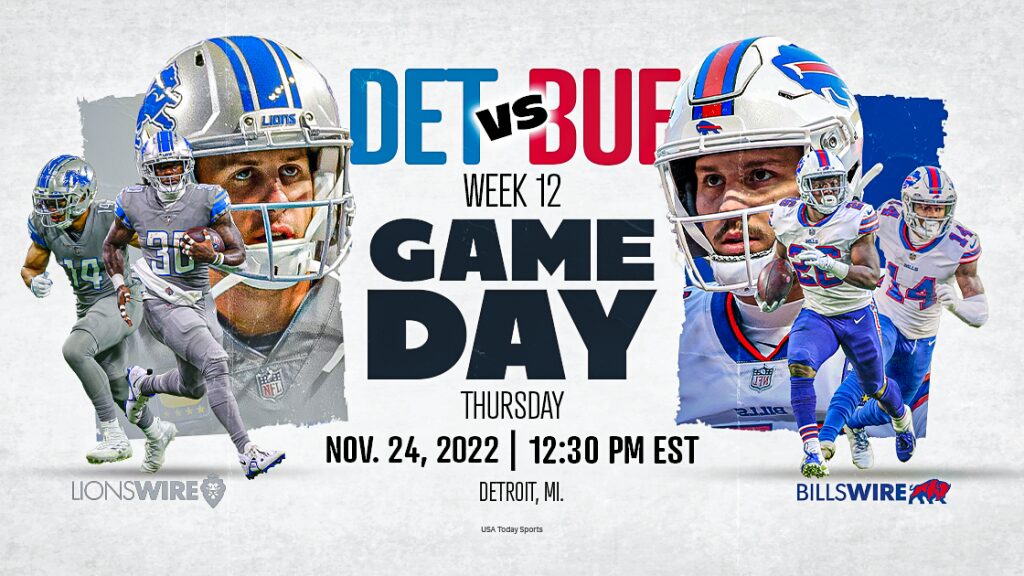 For the first and only time all season, the Detroit Lions draw a national television audience for the traditional turkey day kickoff. Hosting the Buffalo Bills, the NFL’s top team in point differential, is no easy task for Dan Campbell’s Lions.

Here are a few of the things running through my head a couple of hours before the game.

–The injuries to the interior offensive line are a very bad development for the Lions. Hank Fraley is a great developer of young OL talent, but he’s got his work cut out for him on a short week with no actual practices.

–Amon-Ra St. Brown should be in for a big game. Having DJ Chark to stretch the field and occupy the (very good) Bills safeties should open up room for St. Brown to catch nine passes for 96 yards.

–We could see a D’Andre Swift revitalization against Buffalo. Swift finished the Giants game on a positive note and he’s got a shot at poking his head a lot farther out of RB coach Duce Staley’s doghouse with a good performance against Buffalo.

–It’s going to be a rough game for the Lions safeties, Kerby Joseph and DeShon Elliott. They’ve both been playing well; Joseph is quickly proving to be an impact talent in the passing game. But the Bills offense with Josh Allen as a running threat and the vertical receiving options in Stefon Diggs, Gabriel Davis and even TE Dawson Knox are a different type of threat than the Lions have seen. It doesn’t mean they’re bad players; it means it’s a very difficult task.

–The Lions special teams will need to make a big play or two to help tip the scales. Coordinator Dave Fipp’s units have been pretty sharp lately, but Detroit cannot afford a shank punt like last week’s from Jack Fox or an off-target snap from long snapper Scott Daly.

–Aidan Hutchinson will have another strong game where he makes a couple of impactful plays. And the national audience will love it.

–Jared Goff will need to have his best game of the season for the Lions to win. Doing that with two new guards against a very talented Bills defense is asking a lot.

–Campbell’s team will not be intimidated or in awe of the Bills. And that gives them a chance even as 9.5-point underdogs.

–Ford Field will be rocking and that’s going to make an impact on the game, at least early on.

–The Lions fight hard early on but ultimately succumb to a more talented, experienced, well-coached Bills team. Buffalo just has too many paths to victory…