What They Are Saying: Duke Week 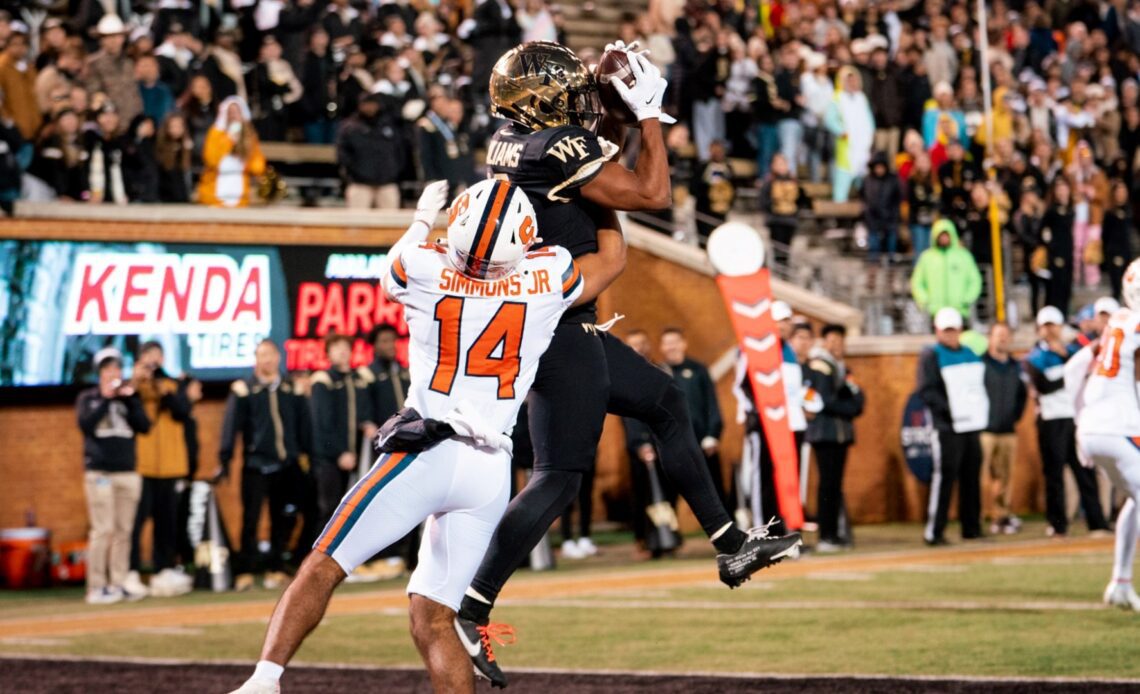 
WINSTON-SALEM, N.C. – Coming off a 45-35 win over Syracuse on Saturday Nov. 19, the Wake Forest football team is set to face Duke this Saturday, Nov. 26 in Durham for the regular season finale.

Ahead of the matchup, the Deacs met with the media to discuss the matchup and other news around the Wake Forest program.

“To all of Deacon Nation, I really appreciate your support all year. The home crowds have been great and the students have been awesome. The way we finished against Syracuse, honoring the 22 seniors, it was a great way to finish their careers here. We had a lot of students who stayed until the very end of a cold night. We’re grateful to them. We also have a bunch of people in our support staff who are leaving, in the recruiting office or operations. I’m grateful for all the time they’ve spent at Wake Forest.

It was a really good win for us, after the three losses. Once again, we fell behind my double digits. It was our goal not to do that. But a lot of credit to our players. We just keep playing. We didn’t start fast and didn’t end fast, but from the middle of the second quarter to the middle of the fourth quarter I thought we played really good football. Falling behind 21-10, we basically scored 35 unanswered points. We got a little sloppy at the end, which can happen. It was disappointing that it happened, and we’ll need to play 60 minutes this week to be competitive in this game. But there were a lot of good things.

It was great to see Brendon Harris get a pick-six, that I thought at the time sealed the game. A.T. Perry broke a program record for receiving touchdowns. Sam (Hartman) played at a high level. Our offensive line, I thought Sean Maginn in particular had a great game. Some of our seniors, Michael Jurgens, Loic Nya and Je’Vionte Nash played good games. Tyler Williams had one of the best games he’s ever had here. He was all over the place. We did a lot of good things. We played with effort and played hard. It was sloppy at times, but we found a way to win. It’s great to get to seven, now we’re trying to go 1-0 this week to get to eight, and that will be a challenge.

As you guys know, my relationship with Mike Elko goes back 20 years. I hired Mike when he was 23-years old as our linebackers coach at Fordham. Mike is the only assistant who has been with me at every stop —…