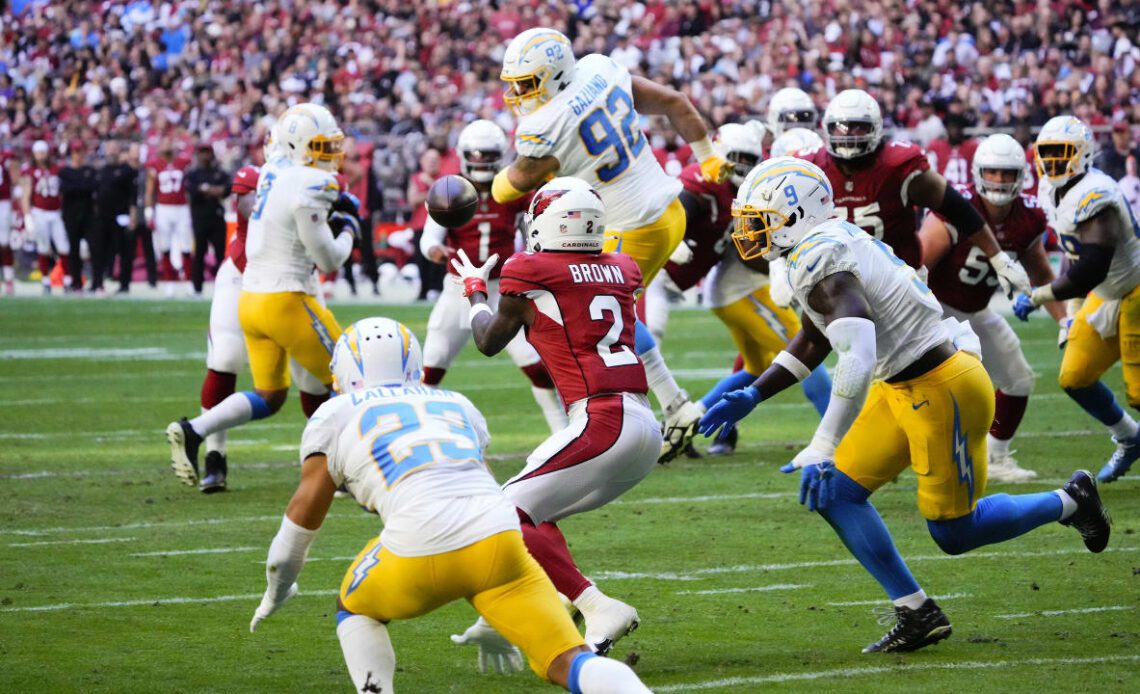 — The two overturned plays – taking away a fumble recovery from cornerback Trayvon Mullen and an interception from linebacker Zaven Collins – proved huge. Here are the comments on each from Mullen, Collins, and referee Walt Anderson.

Mullen: “I heard Arizona ball in the (pile). … I feel like we were supposed to have the ball. But it is what it is. It’s one play and we didn’t get it. It is what it is, but I can’t say too much about it.”

Collins: “My hand was under the ball in between my hand and chest and when I fell to the floor, the ball squeezed, and my chest came off the ball and then my hands brought it up. I think the referees saw it at a funny angle, I don’t think it ever touched the ground, but from that angle the ball looked like it touched the ground. It’s supposed to be undeniable evidence that it wasn’t a catch so that sucks there

Anderson on the near-interception: “We had a good view facing the defender as he was going to the ground. We saw that the ball hit the ground before he ended up getting control of the ball with his hands.”

— What was stunning about the fourth-quarter offensive troubles was that the drive that preceded them – starting late in the third and bleeding into the fourth for the go-ahead touchdown – was so efficient. The first play was a perfect, patient, pocket throw for 29 yards to Hopkins, James Conner had a fourth-and-1 bullrush up the middle for four yards, and it looked like the Cardinals were in control.

— Both Murray and coach Kliff Kingsbury downplayed the NFL Network report that things had been tense between them and the two weeks Murray was out the pair worked out some things.

“There was no tension,” Murray said. “This whole season has not gone the way anyone wanted or envisioned it to go. Between me and him though, we’re good.”

Said Kingsbury, “”We’ve been good. When you’re not winning obviously everybody’s going to be a little on edge, but I thought he played really well today.”

— Kingsbury was asked if he was concerned about his job security. “I’m not.”

— Robbie Anderson made only his second catch…