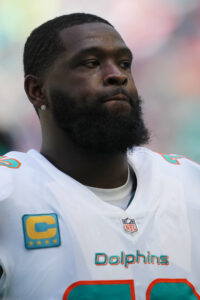 The Dolphins came away with a comfortable win today, but their offensive line suffered a potentially significant blow in the process. Left tackle Terron Armstead exited the game with a pectoral injury, and is now facing the possibility of missing time for a stretch.

Armstead suffered the injury in the second quarter of the Dolphins’ win over the Texans, and did not return. Questions were raised about the severity of the ailment, and as such the length of Armstead’s absence, but the worst-case scenario appears to have been avoided. NFL Network’s Ian Rapoport tweets that the 31-year-old suffered a pec strain, and that the team hopes to have him available to return “relatively soon.”

Armstead missed Miami’s Week 6 contest, and had already been playing through a toe injury. This latest ailment could leave him sidelined for longer than that, though he is known for having a high pain threshold dating back to his nine seasons in New Orleans. Still, missed time was a constant during that portion of his career; the former third-rounder has yet to play in every game in a single season in his career.

Signed to a five-year, $75MM deal this offseason, Armstead represented one of numerous moves the Dolphins made at attempting to improve their offensive line. The three-time Pro Bowler had delivered a solid PFF grade of 76.3 heading into today, having yet to allow a sack. Any absence from him would put a dent in the Dolphins’ pass protection in particular.

Elsewhere on the o-line, right tackle Austin Jackson also left the game after suffering an ankle injury. It was that same issue which landed him on IR in September, interrupting his full-time transition to the RT spot. That position had been manned by Greg Little, then Brandon Shell, in Jackson’s absence. More shuffling involving those two, and potentially starting left guard Liam Eichenberg, who has left tackle experience, could be necessary depending on the severity of Armstead’s and Jackson’s respective injuries.