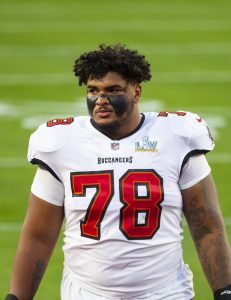 The Buccaneers suffered an overtime defeat to the Browns yesterday, but the health of one of their top offensive players was a key talking point in the aftermath of the game. Right tackle Tristan Wirfs was carted off the field with an ankle injury, leading to fears of a lengthy absence and a resultant blow to Tampa’s offensive line.

X-Rays were negative, however, leading to hope that the worst-case scenario had been avoided. Head coach Todd Bowles confirmed as much on Monday, saying that Wirfs is dealing with a high ankle sprain. That will still likely lead to a stretch where the All-Pro is sidelined, though. ESPN’s Jeremy Fowler reports that a three-to-four week recovery timeline can be expected, and that, encouragingly, surgery does not appear to be necessary at this point (Twitter link).

Wirfs has yet to miss any time in his NFL career, operating as an immediate full-time starter at the right tackle spot after being drafted 13th overall in 2020. His elite PFF grades have continued this season, with an 87.3 overall mark in 2022 – the third-highest amongst qualifying offensive tackles. His absence will therefore be felt by a Buccaneers team which has seen a steep drop-off in effectiveness up front this season compared to the recent past.

Tampa is without all three of their starters along the interior of their o-line from last season, after Ali Marpet retired in February and fellow guard Alex Cappa signed with the Bengals in free agency. Center Ryan Jensen is under contract, but is not expected to return to game action in 2022 as a result of a major knee injury. That left Wirfs and left tackle Donovan Smith facing an increased burden to provide stability for the team’s offense this year, one which has been marred by inconsistency and an underwhelming ground game.

Bowles called Wirfs week-to-week, setting the team up for their second-ever instance of needing to replace him. The Iowa product missed one playoff game last year, also due to a serious ankle injury which, despite initial indications, also did not require surgery. Veteran Josh Wells and undrafted rookie Brandon Walton are available as options to fill in down the stretch, as Tampa looks to get a firmer grip on their NFC South lead in the coming weeks.