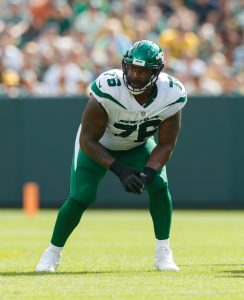 The Jets opted against blocking the Patriots from poaching practice squad tackle Conor McDermott on Tuesday. That transaction preceded good news on the injury front for New York.

George Fant is back at practice Wednesday. The Jets have started the veteran tackle’s IR-return clock, which gives the team three weeks to move him back onto the 53-man roster. Fant has been out since Week 3.

A knee injury led to Fant being shut down. While Fant attempted to play through the malady during a rough Week 3 outing, he did not finish that game and was soon shelved. The Jets are in good shape, injury activation-wise, with six such moves remaining. Fant has dealt with knee trouble for a bit now. He went down with a knee injury late last season and began training camp on the Jets’ active/PUP list as a result.

Fant’s return would be a boon for an offense that has played without its optimal tackle arrangement all season. The team aimed at having Fant at left tackle and Mekhi Becton on the right side, but Becton’s season-ending avulsion fracture soon nixed that. The team then planned on having Fant move back to right tackle to play opposite Duane Brown. The latter’s preseason injury scrapped that concept. Fant’s injury then prompted the team to move second-year guard Alijah Vera-Tucker to tackle, but Vera-Tucker is now out for the season.

Brown and Fant have yet to play together as Jets. Should Fant return to action, the former Seahawks teammates will be slated to start together as Jets tackles — at long last. Although the Jets signed Mike Remmers as tackle insurance, it has used fellow in-season pickup Cedric Ogbuehi — signed off the Texans’ practice squad in late September — as its right-side starter during Fant’s absence.

From 2020-21, Fant was a Jets constant at tackle. The ex-college basketball player and ex-Seahawks swingman started at right tackle in 2020 and left tackle, replacing an injured Becton, in 2021. Extension buzz circulated this offseason, but no deal came to fruition. The Jets’ plan to have Fant play on the left side set up the prospect of a considerable raise for the 30-year-old blocker, but Brown’s arrival — on a two-year, $20MM deal — and the knee injury changed the equation for the third-year Jet.

The Jets can activate Fant this week. Moving the veteran back into the lineup in place of Ogbuehi would stand to help new starting quarterback Mike White, who has not taken a snap yet this season.